Well, I did not clean out a single closet.

I did a reasonable amount of housecleaning. I went on a very long, very hot hike with a friend. I spent an inordinate amount of time watching Foyle’s War.

All in all — quite pleasant.

It is unbearably hot here. It was 100 yesterday, and 96 the day before. This is always the hot season, but that’s fairly extreme. The cats have been lying around looking pained. It’s supposed to cool off now, and I don’t want to see any pictures of lovely trees changing color. I just can’t imagine that it’s actually fall in other places. 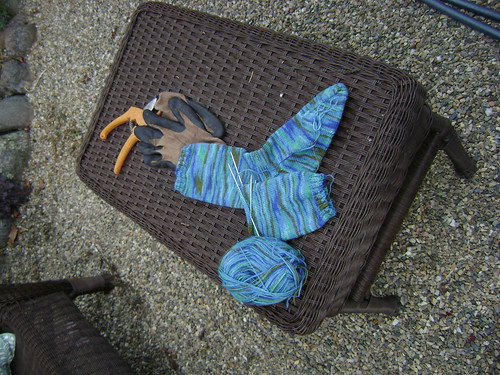 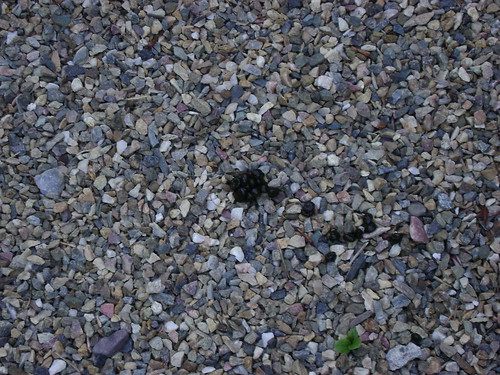 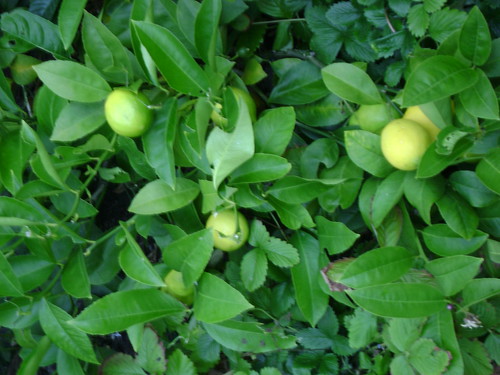 And the lemon shrub has finally started to produce lemons. This is good. 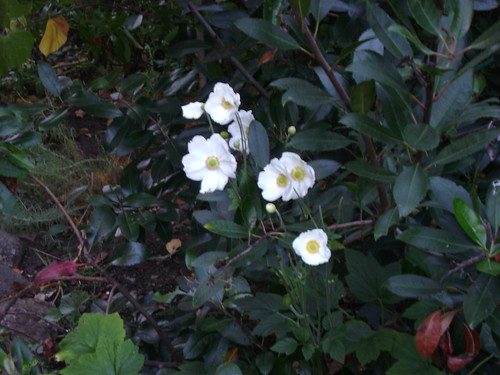 Look at the anemones. They came up all by themselves. I like them a lot. 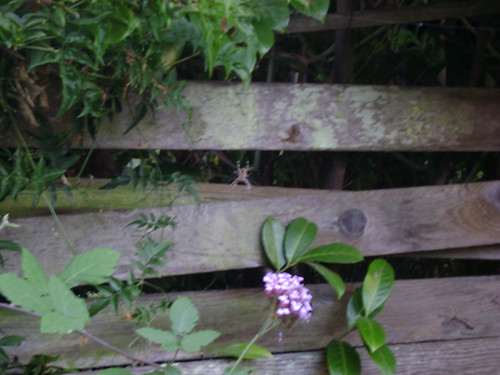 Can you see the spider? They are everywhere. Be careful when you walk on paths. (I can appreciate spiders, but I don’t really like them. I can appreciate them when they’re not going to touch me.) 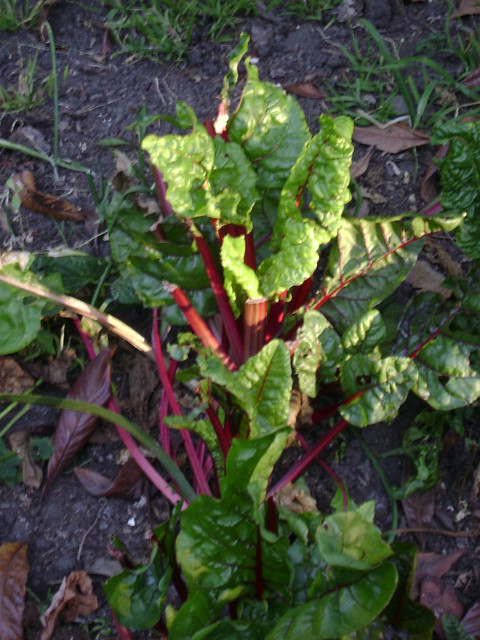 I think the deer have been munching on the chard. Either that or I did a very bad job of picking some the other night in the dark. 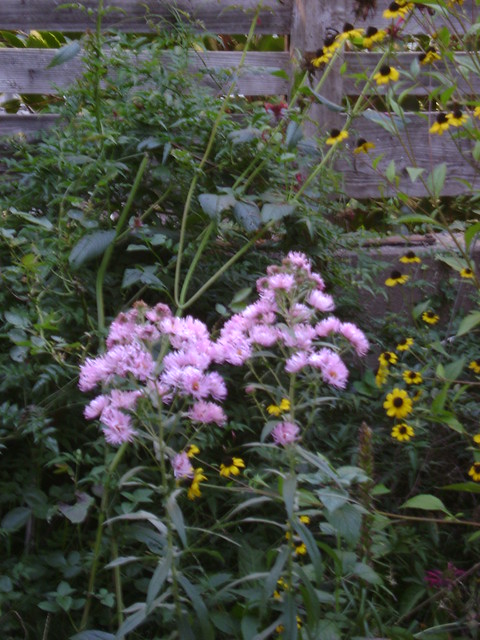 This aster! It’s at the back and I can see if from the house. 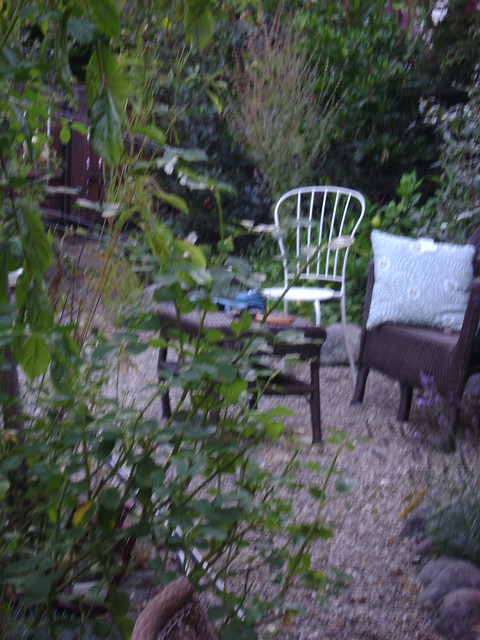 The sock, from far away. 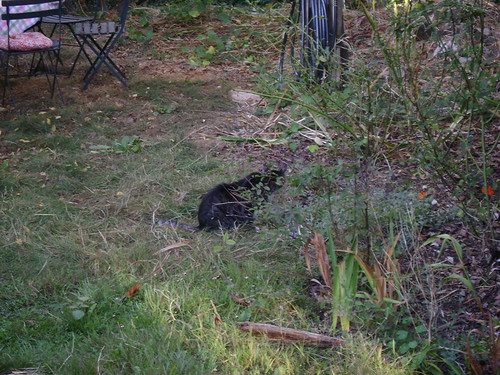 The native creature, in a state of alertness. He never rests.

Up early to put K on the train to the plane to New Orleans. He’s off to a music festival and I’m staying home. This is a novel thing.

I had thought about going on a kayaking trip this weekend. It was especially appealing because of the full moon. But in the end I opted to stay home. Partly to save money, but also from a residual feeling that one of us should be around in case the kids need us, which is silly, I know. But also, I confess, from a desire to experience having the house all to myself for the first time ever. What will it be like?

Will I really clean out every single closet? Will I spend the whole weekend on the couch reading books? I don’t know! It already feels pretty novel, though.

There was an estate sale down the street and I came home with this mirror — which is actually a little bit to big for the space. Hmmm. I think it’s pretty, though.

It was a funny old house that I thought had long ago been broken up for student apartments, but it hadn’t. An old woman owned that house and the one next to it, which is apparently full of furniture but unlived in. She was keeping it in case her son moved back, but he never did. There’s a tiny lot next door full of fruit trees, too.

She had lovely things, and it was a beautiful house — wider than ours and with a nice big staircase. I wonder what will happen to it. The master bedroom was huge with a whole wall of casement windows opening onto the street, but into a row of plane trees. You never would have known from the outside. And the bedroom was painted a leafy green, which seemed like an odd choice for an old lady.

Actually, it was all a little sad. Remind me not to buy the house next door and fill it with furniture for the girls.

I am home with some sort of ague, although I’m feeling a little better. Jimmy is sleeping on my knitting. Lucy prowls the dining room.

I really should go pick up some cleaning to send to M, and then mail off several packages and get some coriander. I really should . . . I’m hungry, which is surely a good sign.

I’m feeling slightly cranky, and here are the reasons why.

Okay. I think that’s it now.

I slipped in Who will run the frog hospital while I was supposed to be reading Game Change. It was infinitely more interesting, but also somewhat sad.

Have you seen this?

I slept late, talked to N and then, after a bit, went out into the yard and cleaned up the side. It actually did not take very long.

Then, in the interest of testing out my hiking boots, I went for a short hike in some place called Huckleberry something.

It was lovely, and the huckleberries were ripe and all along the path I kept encountering people stuffing their faces with huckleberries. Yum.  It felt like Blueberries for Sal without the bear.

Then I came home and K and I went to see the Girl Who Played with Fire. I think it wasn’t quite as good as the first one. I think the book was just too baggy, and when you cut out all the complications you’re just left with a lot of action, which is not all that interesting without the backstory. I thought they did a great job with the first one.  I have high hopes for the third one.

K and I stopped at the Turkish restaurant on the way home and had dinner, and now I have just made two quarts of frozen yogurt for a party at work tomorrow. It’s honey, and I made it with this delicious honey I bought in Quebec. I think because it is a special honey I maybe didn’t put quite enough in. (I don’t want to use it all up.) It tastes delicious to me — very tart, and not too sweet.  I don’t know if it will appeal to my co-workers, though.

You know what would be really good? Honey huckleberry frozen yogurt.  Hmm. Maybe I should go back and pick some.

Interestingly, in the movie they dropped the existence of Lisbeth’s sister Camilla. That only make sense — she’s an unnecessary complication. I do think there was going to be something involving her in one of the next books, though — there was clearly something interesting between the two of them.

It’s also interesting that in Sweden you’re apparently allowed to be in movies if you have bad skin.

It’s been a busy morning, it seems.  I texted M back and forth — she feels she needs a jacket and in between discussing that I got a bit of information. The sculpture class is going well and she’s headed into town to purchase some supplies for more sculptures.

That’s all good — she’s not hiding under her bed in despair.

Apparently she can’t actually talk — I think it’s because her roommate was there.

I finalized our plans to go visit her in October and also called K’s mother to make sure we could use her car. All good.

I checked around on facebook and friends are finding apartments and finishing up degrees and on training rides in Colorado for big charity races coming up.

It’s gorgeous outside. I’m so happy to finally have the time and wherewithal to start cleaning up the garden. I pruned the roses and considered the apple tree. I think I’m supposed to wait until winter to prune it, but it really needs pruning, and I do need to get a path in to the compost o Kevin’s feet don’t get wet this winter.

Everyone else is having a busy morning, too. The hummingbirds are driven to trying the nasturtium flowers, and a neighbor behind and the neighbor next door have been drawn out of their houses by the nice weather to sit in the sn and have long pleasant phone conversations. Neither is speaking English. It’s nice. The woman next door has a very nice laugh.

I’m sure I have lyme disease.  My head is stuffy in a weird way. My joints hurt and I’m really tired.

Or maybe a cold.