My phone, which is my camera, is not cooperating, and I cannot show you any pictures, and I’m quite sad about that.

But here’s what’s going on:

Plodding through the list. That’s a good thing. I’ve made it through some knotty issues, but a few remain.

Oookay. Guess I’d better get on with it, then. 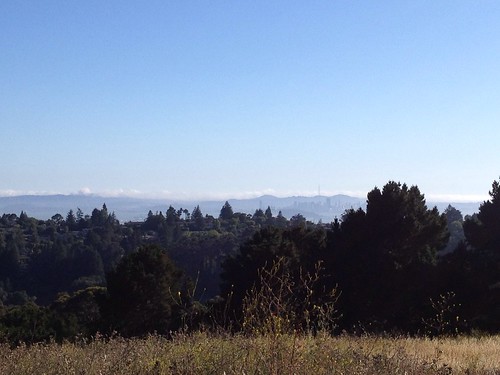 M and I went on a small hike last evening. 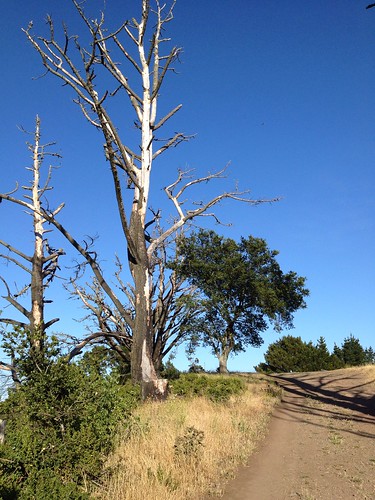 I haven’t really been hiking at all lately, and it felt great. 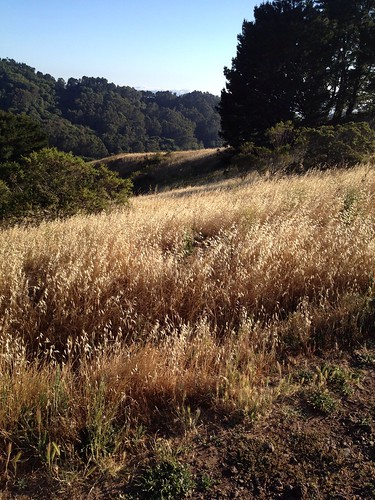 It seems early to me for the hills to be so golden. But maybe the end of May is normal — it also seems really early for peaches to be in the grocery store, but maybe that’s normal, too. Is it? 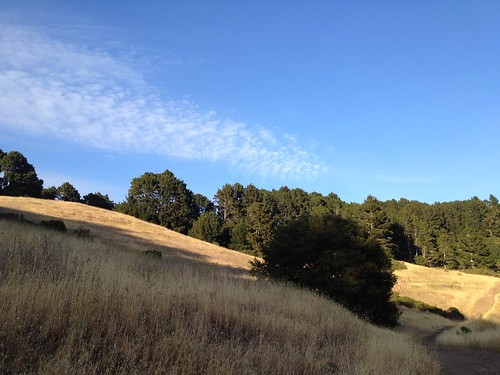 Then we went home and watched The Conversation for our new movie club. Parts of it seemed really dated, but I actually liked it a lot.

It’s summer! Evening walks and movie viewings and have M at home!
I’m in favor.

M is just learning to drive. I realize this is late (she’s older than 16), but she’s not the only one. A lot of her friends, and her sister’s friends, and children of friends of mine, don’t drive. I think it’s where we live — you can get around pretty well without driving. It’s not like where I grew up, where you were trapped at home if you didn’t drive, and it often wasn’t easy for friends to come and pick you up, since they may have lived far away.

We’ve also been speculating that more online communication and texting makes it less tragic to hang out at home. That’s probably more true for some than for others. But we also live in walking distance of downtown. It’s interesting, because I like that a lot, although I think I would also like living out in the woods. But would I really? Something to consider.

Anyway, the reason I mention is that we’ve been driving around some amazing, unpopulated places, like this old naval base which is full of huge warehouses and parking lots, right on the water.

Or also, out on country roads, but I have no pictures of that.

She did a good job of avoiding the bicyclists and a roller skater.

I think it helps that the places she’s practicing are pretty uniformly beautiful.

We need to: unpack and put away M’s belongings. This involves incorporating a large number of art works into our decor. The weasel has found a place on the desk under the front window, where he’s out of the sun. That leaves a badger, a horse, and about 80 crows still to house, not to mention some pretty nice prints. Our house does not have a tremendous amount of wall space. Anyway, linked with this is the need to get rid of a bunch of stuff we don’t want. Really. I mean it this time.

The outside needs a bit of work, too. Ahem.

We’ve got to make sure everything is set for M’s trip to Italy. The pochade box! We need to order it! Plus paints, brushes — that stuff she has, or can get locally. I think there are questions, though. And does she have anything to wear? (Probably yes.)

There’s just a lot — I was just discussing this with my friend L, who said she could retire and she would still have a full time job. It’s a thought.

And then of course there has to be some kind of barbecue — that goes without saying, I think. Which is another reason to get all the spider webs off the outside chairs . . .

All over campus, graduates are posing before iconic objects, talking to parents, twiddling with tassels and hats and looking kind of stunned.

I’ve been impatient – dodging around them as they stand in the middle of the sidewalk while their parents think about lunch, or where they parked the car, of how much their feet are hurting as they trail abotu the campus. Today I had to walk down to the main library, though, and the sight of this recent PhD posing for her parents made me smile.

It’s quite an accomplishment! 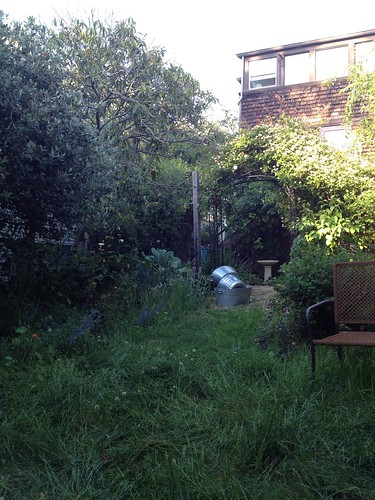 I have made a delicious cauliflower pesto for dinner, made some headway with the laundry and the garden . . .

Time to go try out the lawn chairs, I think.

I’m working my way through the mystery novels of Ake Edwardson. They’re better the more you read, I think.

The house is empty and it’s warm outside.

I suppose if I fell asleep out there it wouldn’t be the end of the world, either. 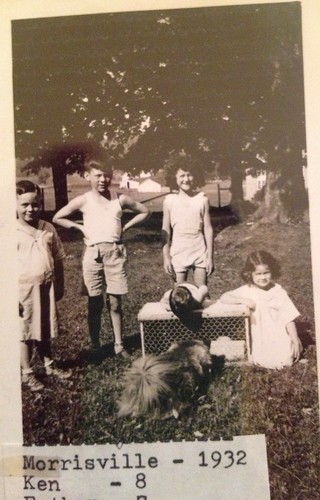 K’s aunt had the goods – a series of great pictures of K’s mother E, her siblings, parents, aunts, uncles, and even her grandparents. We’ll have to go back soon and make copies of all the photos and then distribute copies to the family. In the picture above, E is in the middle at age 7. She had her brothers and sisters are standing around a rabbit in a cage. Somebody’s dog is sniffing the rabbit. The aunt we visited sits on the right. The uncle we visited is peering at the rabbit.

She seems a bit smaller in this school picture, maybe 5? To me, she looks a bit like M when she was small here — actually, I’ve seen this expression on both M and N, I think. 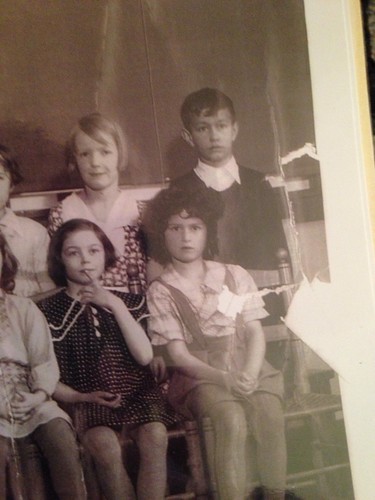 A back to school photo, maybe from the same year? 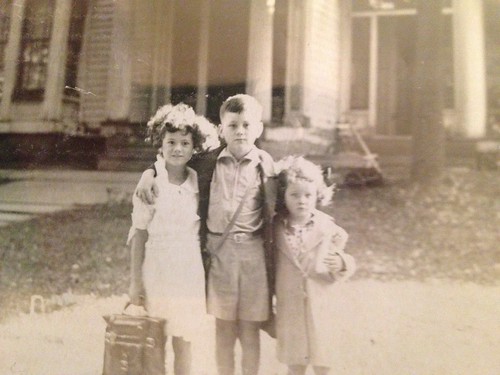 And here are she and her sister with their cats. (!) 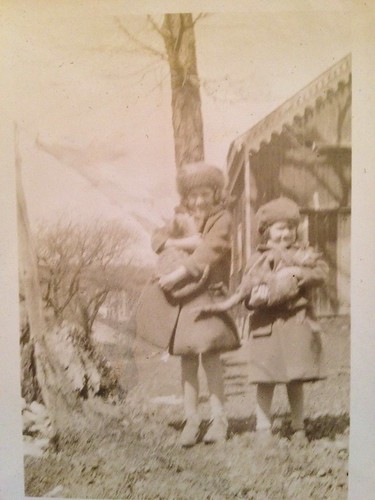 Contrary to expectation, it was a great vacation.

My brother’s wedding in Massachusetts was lovely. Good choices included not having the ceremony at my mother’s house, having the rehearsal dinner catered, our staying at a B and B. W is lovely and so is her family. I’d forgotten that she and my brother met in high school (they are now in their 40s) which meant that there were all kinds of Connecticut connections, which should not have been surprising but somehow was. My brother is younger than I am, but since my mother has moved east and I never go to Connecticut, I don’t often meet people who know about the town I’m from. That was fun.

I dawdled an extra day with my mother, which was nice, and then drove north to hang out with N. I’m starting to really like the town she lives in, let’s call it the “Second biggest city in Maine.” Honestly, that was probably the most vacation-like part of our trip. N went to work and K and I drove to to the beach one day, and spent one day just around town. We stayed in a luxurious hotel (well, not the very cheapest of the cheap) and didn’t have to do much of anything.

From there, I flew to Ohio, where I packed up M while she worked furiously to finish a seven ft. tall self portrait in pencil. (I stayed with Jeanne!) That took days, and we left for NY on Saturday night at 7, stayed over night in a rainstorm at a very sketchy motel in Erie, PA, arriving in Morrisville on Sunday morning. K’s aunt and uncle were lovely, and tons of his cousins came. It was really really great. We stayed there til Tuesday, when we drove to New Hampshire to see K’s aunt and more cousins. It was a really good idea to do this, if I do say so myself. K’s aunts and uncles are still sharp, but elderly. We looked through tons of pictures, and they remembered so much. It’s so odd to me, coming from an almost obsessively family-oriented family, that families can sort of drift apart the way K’s seems to have. Or rather, they haven’t, but K has from them. We heard from K’s aunt that there was a family reunion some years ago that K’s brothers both went to. I’m not sure we even knew about it, although perhaps we did. Part of that has to do with our being in California, but part of it, I think, has to do with K’s family not regarding it as very important. In any case, we spent a great weekend with K’s uncle, and N and M now know them and like them — it helps that we actually already knew one cousin very well, since he went to art school near us, but his parents are great. Also, upstate New York is so beautiful — who knew? Like Maine, it was just beginning to leaf out. Morrisville is in a rural area full of rolling hills between the Catskills and the Adirondacks. If I weren’t already committed to Maine, I would be torn. K’s uncle has a camp on a little lake near their house which was perfect — a simple house, a dock, a bunch of canoes —

Anyway. Pretty idyllic. Family connections renewed. Strangely restful — maybe because although we went many places, we didn’t have to do very much in any of them. Very, very nice.