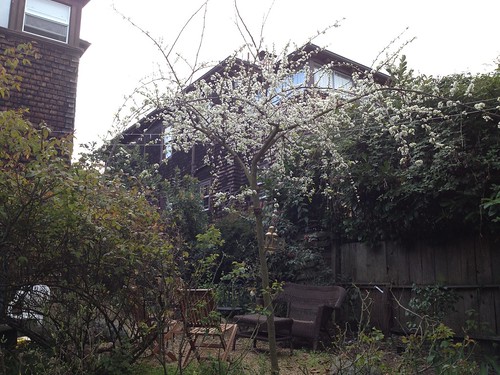 This picture also two years old, but the same thing is happening in the yard this year. That’s good.

I sort of hate this time of year. Winter, such as we have here, is ending, and I feel restless and regretful. I have not been up to visit the snow. The kids will soon be cast adrift from their current pursuits and in flux again. Things seem unsettled.

Of course, it is hard to dislike a plum tree.

Spring is busting out all over.

Okay, so I have been going to the gym religiously twice a week for, oh, two weeks now, and what I feel is exhausted.

Don’t mind me. I’m just going to curl up under my desk here.

Actually, I’ve been clearing off my desk. It’s actually kind of fun. Quite surprising what’s under all these piles.

And now, praise the lord, it is time for lunch. It’s another rainy day — I wonder what kind of soup they have upstairs.

It reminds me a little bit of A Tree Grows in Brooklyn, only because it takes place in Brooklyn, and there is a mother and two children, and the older is a beautiful boy and the younger, who is the narrator, is the less beautiful girl, but otherwise it’s not similar at all.

Bad things do happen in Someone, but in a completely different way you feel that everything is going to be all right. Although it kind of isn’t — in a way, both books end up in the same place; it’s just the process of getting there that feels different.

I read another book by Alice McDermott a long time ago. It was probably Charming Billy. I remember a similar quietness, and also the feeling of being inside the narrator’s head, figuring things out along with her. It’s wonderful.

I am tired. I think I stayed up late reading, and then I got up early.

All right, then. I believe it’s time for some coffee.

Thinking about going to the mountains to learn how to snowshoe. Is there more to it than just walking?

We went to Carmel this weekend.

It was lovely, and we saw a lot of birds. We saw some red-winged blackbirds, a California thrasher, some chickadees, egrets, herons, grebes, and a bunch of little yellowy-greeny birds that totally defeated us. Kinglets? Orange-crowned warblers? Lesser yellowfinches? Vireos? All of the above?

The breakfast table where we were staying looked right out into the middle of an oak tree.

So I follow this guy, Ilya Varlamov, on Flickr. I don’t know much about him. He’s Russian. He seems to be an independent photojournalist with an interest in urban planning (maybe that’s his day job?) He travels a lot.

Lately he’s in Kiev, taking pictures of the opposition. If you can read Russian, he explains what he’s seeing here. But there’s also an explanation in English here — where it says NB. He says there are between 10 and 50 thousand protestors out.

Aside from anything else, it’s amazing to me that I found this on Flickr. 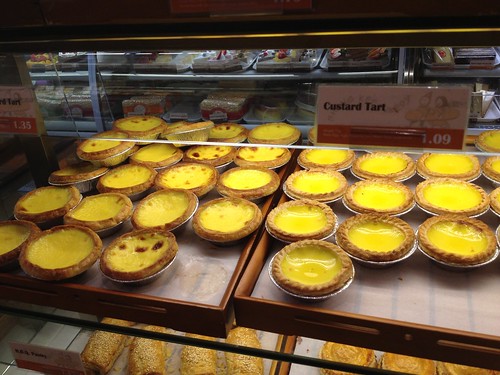 These custard tarts tell the story of how the Portuguese encircled the globe. These are from a Chinese bakery, but they are also served at dim sum, which is a Hong Kong tradition, and it’s my theory that they came to Hong Kong via Macau, which was at one point a Portuguese colony. You certainly find them in Lisbon and Belem, and they seem more European than Asia, so I’m thinking the transmission went that way.

I have a similar theory about Portuguese sweet bread, which you find in Portuguese neighborhoods in Providence and New Bedford, and also in Hawaii, where I think it’s just called Hawaiian sweet bread. I suspect a whaling connection.

Okay, those are my theories of global circumnavigation and culinary transmission. I probably should have tried to get a grant to write a book, but it seemed faster to publish them here.

Except, I will tell you that it was so surprising, first, to find them at dim sum, when they seemed so very European, (and where they seemed so much a thing that M might eat, at 8, when stuffed taro cakes were viewed with suspicion) and then even more surprising to encounter them in Lisbon, (when M was 13, and already loved them) where they seemed very much of a piece with a general enthusiasm for pastry.

The tarts above have now appeared on Telegraph Ave. I sent that picture to M, to make her homesick.

We went birding down at the marina last weekend. 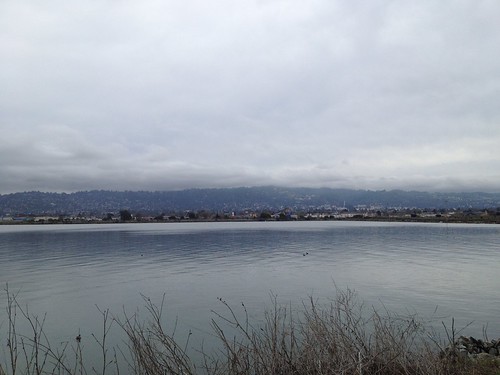 Some of these are buffleheads

It was pretty fun.

Okay — the Flickr shakeup has turned up this excellent picture from March, 2012. What lovely clouds!

I have finally figured out how to watch the Olympics, thanks mostly to Maggie. Watch the live broadcast in the mornings. For one thing, Johnny Weir and Tara Lipinski are doing the commentary, and they are fabulous. Not only do they look amazing, but their commentary is lively and knowledgeable. (Here’s an LA Times review.) Also, the morning coverage shows everyone, not just the 6 people NBC has decided you should see. I much prefer that. I’d like to do the editing myself. Also, staying up to midnight is just not really feasible generally.

I’m also thinking that maybe the some sports are best read about. Consider, for instance, this opening sentence in a NYT article about the biathalon:

Coaches for Norway’s men’s biathlon team fanned out around the track for the 15-kilometer mass start race Tuesday afternoon with much of the equipment you would need for a really good bank heist.

In fact, a lot of the NYT Sochi coverage has been pretty lively.

So — there’s my advice. You can thank me later.

Flickr has taken it upon itself to upload all the pictures from my phone, and it’s taking it some time. This is actually something I’ve been meaning to do for quite some time, so I’m just letting it go ahead. On the one hand, it’s fun to see all those two year old pictures again. On the other, I have some great pictures from the weekend which I guess I will post here tomorrow.

The birding class! We met at the marina. There are a lot of birds down there, and I can now identify a lot of them. I like birds, actually, so I am happy about this. I am particularly fond of the American widgeon (what a great name!), although I guess I’m also partial to the not-ruddy-at-all ruddy duck and the rather beautiful scaup — what a pretty duck. And we also saw a Pacific loon, and a lonely burrowing owl. Oh, and a lot of grebes. And I can now tell a white crowned from a golden crowned sparrow, and I think they are some of the birds I’ve been hearing in my yard.

Sunday I did nothing but sit on the couch in the living room watching the Olympics and knitting a sweater, which some ways up the back I realized was going to be very much too small. So that was all for naught, except that actually, it wasn’t, because I ripped it out and started it again in a better size. I have been knitting long enough now that I don’t get very upset about this sort of thing. Of course, it also takes me about 2 years to knit a sweater, but that’s okay. Oh, and i started watching House of Cards. Delicious.

Monday, I went for a hike with A and J. It was so much fun — I hope I can convince them to go with me again. We went up a mountain and down and it was no big deal. I think 4 years ago I would have found it very difficult, but now it’s just not that big a deal. Encouraging. And I made an enormous pot of lentil soup.

Which reminds me that I’m feeling a little hungry. I do believe it might be time for a little snack.