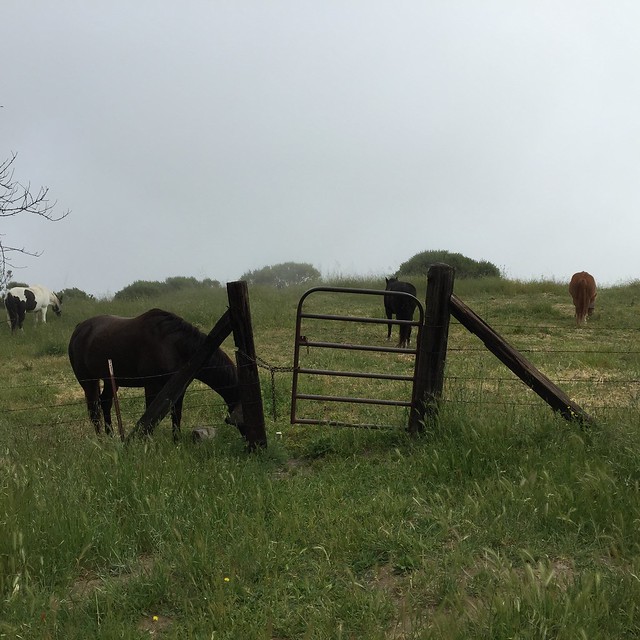 I believe I may have mentioned that I’m attending a conference this weekend. It just happens to be local this year, which is why I’m going. Well, also I’m going to check it out and see if I prefer this organization to the one I usually go to, which meets in the middle of July.

There’s not a lot of money in my profession, which is why we meet in the middle of summer when smart people are lolling about in hammocks. We generally assemble in some steamy town and sweat a alot.

Anyway, I’m feeling somewhat overwhelmed, which explains why I was up from 2-5 this morning worrying. The upside is that I planned out my schedule, which I had somehow been unable to do before. The downside is that there’s a session this afternoon that I’m going to have a hard time staying awake for.

Furthermore, I think it’s time for lunch. You know what I really want? A grilled cheese sandwich. How odd. I don’t think i can have one, but that sounds really good. 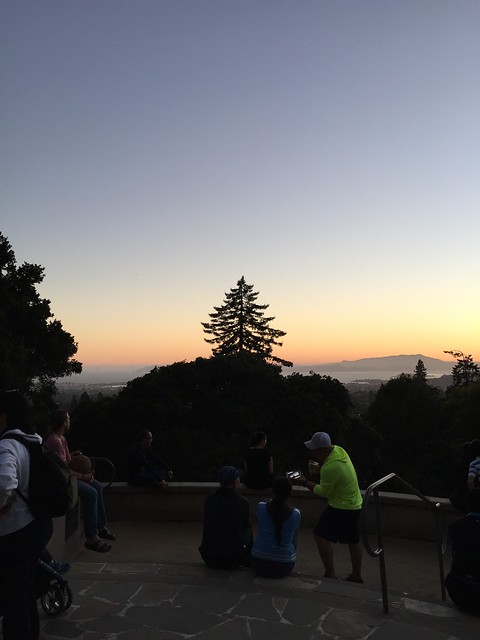 I’ve still got this blasted cast on my arm. It’s such a hindrance! I can’t swim. It’s completely messing with my exercise routine –although there are still things I can do. I can’t garden. Everything I can do takes at least 50% more time than it would otherwise . . .

But I guess I should not complain. It could certainly be worse. A full body cast would be way worse, for instance.

The other thing, though, is the way that not being able to type kind of means I can’t really think. So there’s not a lot of thinking going on here.

Which maybe is okay for summer.

I finished rereading Regency Buck, which has a really interesting construction, and am on to The Grand Sophy.

I’ve been watching a lot of the World Cup.

I’ve given up on eating much — it’s just too hard.

I’ve got two summer conferences to go to — and am seriously regretting I said I’d go to either — What kind of profession makes you go to conferences in summer when you really should be napping by the lake?

All right, then, I’ve got stuff to do. Stuff that will take me way longer than it ought to . . . 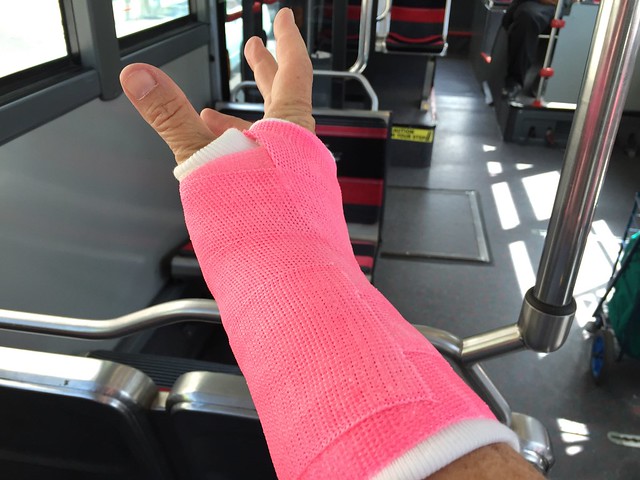 I like the color, but hate the confinement of it. I’m feeling quite sorry for myself, but ok, enough of that.

I do have a nearly overpowering urge to thwack things with it, though. I bet it would hurt, but it would make a nice crack.

Still reading Georgette Heyer. Maybe it’s like a cast metaphor, now — what can be done within the confines of everything — the genre, the rules for people at the time — for everyone, but obviously especially for women. And of course it’s 1819, but also 1970.

I finished Regency Buck last night. It’s an interesting one. Ok, the hero is bad, because before he knows the heroine at all, he grabs her and puts her in his carriage and kisses her, ignoring her protests. Then, of course, it turns out he’s her guardian. (Right, it’s a romance novel.) So, of course that is very bad, and it is in complete contrast with his behaviour as her guardian, where he is, again, high-handed, but very appropriate, socially — takes care of her interests, does nothing untoward, knows what the right things to do are. He understands and enforces socials norms, while also allowing a little bit of play — he lets her buy a high-perch phaeton (some kind of dangerous carriage) and buys her horses. The horse thing is always important — of course, she is great with horses — riding and driving, and we see that she’s not some dumb girl, but a spirited individual. She is a much better driver than her brother, for instance, and yet we see how limited her world is when she causes scandal by driving some kind of carriage to Brighton — racing (and beating) her brother — or she would, if she weren’t stopped by the guardian, who saves her from making a spectacle of herself. (Which is so awful! Haw awful that she’s not allowed to be good at what she’s good at!)

There’s such a contrast between what her brother can do — anything, really — he needs to make mistakes in order to learn — and how circumscribed her life is. There’s just an interesting play going on between propriety and transgression, and they are satisfyingly resolved when the hero marries the heroine. I guess. Well, I guess it’s a sort of socially sanctioned transgression.

But it’s also growing up, right? That you learn to make compromises and keep your temper and accept that ladies don’t get to drive in races, although, of course, men do. I think that’s why it’s pleasing that the hero is also transgressive — they’re both misfits (as well as fitting in very well, because of course they are Important People, who to some extent have license.)

All right. I will ponder further. 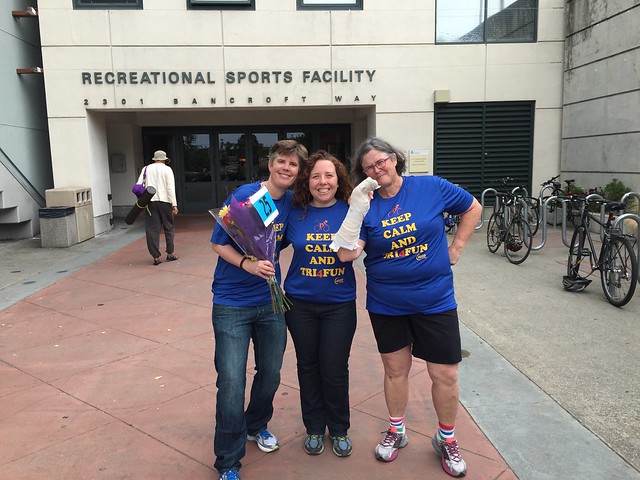 I did not do the swim. I did the bike, and walked the run portion with a 71 year old woman from Alaska. It was good I was with her, because she kept up a blistering pace that I was compelled to match.

It was pretty fun.

Next time I’ll be able to swim.

I go to the doctor this afternoon. Perhaps he will replace this ridiculous splint with a more shapely cast, although a cast doesn’t sound like much fun, either. Mostly I just want my arm back.

All right — on to the next thing! 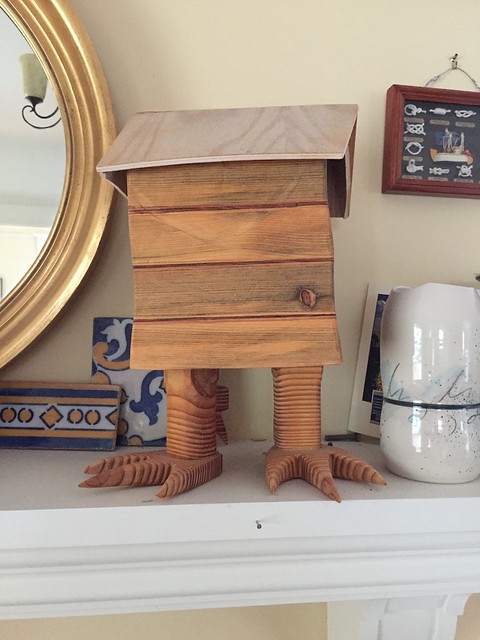 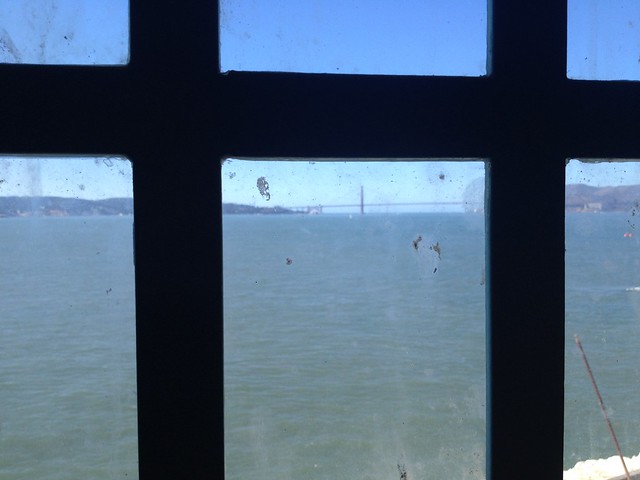 . . . Some years ago – never mind how long precisely – having little or no money in my purse, and nothing particular to interest me on shore, I thought I would sail about a little and see the watery part of the world. It is a way I have of driving off the spleen and regulating the circulation. Whenever I find myself growing grim about the mouth; whenever it is a damp, drizzly November in my soul; whenever I find myself involuntarily pausing before coffin warehouses, and bringing up the rear of every funeral I meet; and especially whenever my hypos get such an upper hand of me, that it requires a strong moral principle to prevent me from deliberately stepping into the street, and methodically knocking people’s hats off – then, I account it high time to get to sea as soon as I can. This is my substitute for pistol and ball. With a philosophical flourish Cato throws himself upon his sword; I quietly take to the ship. There is nothing surprising in this. If they but knew it, almost all men in their degree, some time or other, cherish very nearly the same feelings towards the ocean with me. 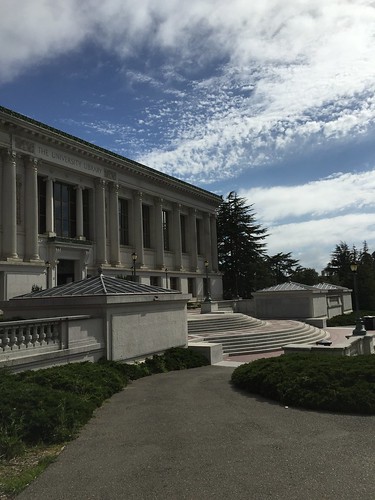 so the hand is still broken. i had surgery a week ago, so i’ve got five more weeks until it’s healed. i have to say it’s a big nuisance.

in other news, it’s finally summer here. for a week, anyway.

and i’m feeling kind of mopey.

i think it’s also that it’s just harder to eat. i can’t open jam jars, for instance, or spread butter, and who wants dry toast?

speaking of which, it’s time for lunch.