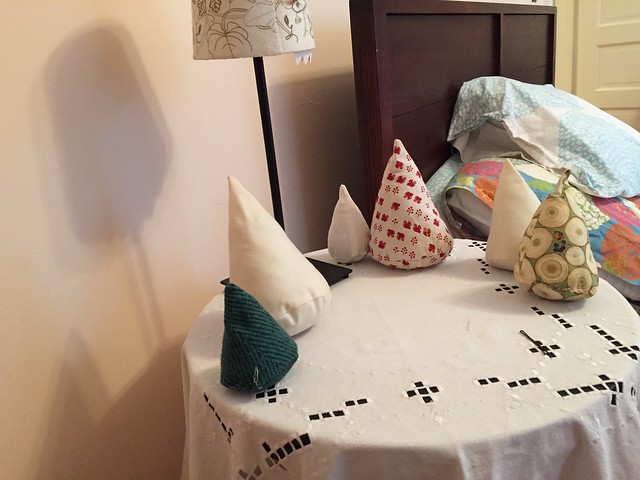 I made these silly little trees many years ago. I just recently dragged them out again because M wanted to draw them. 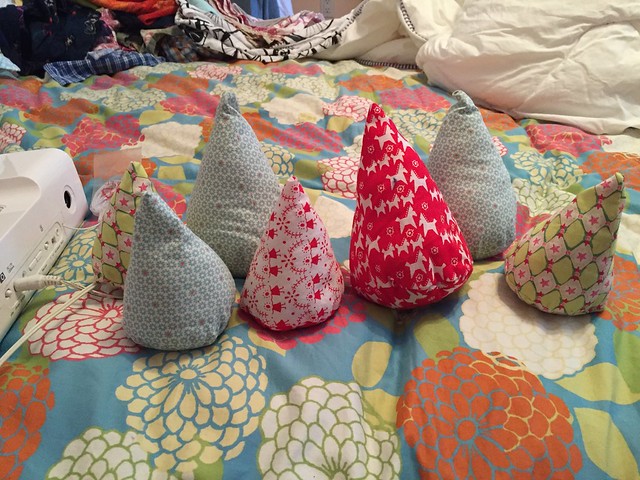 I sent her a bunch of pictures. 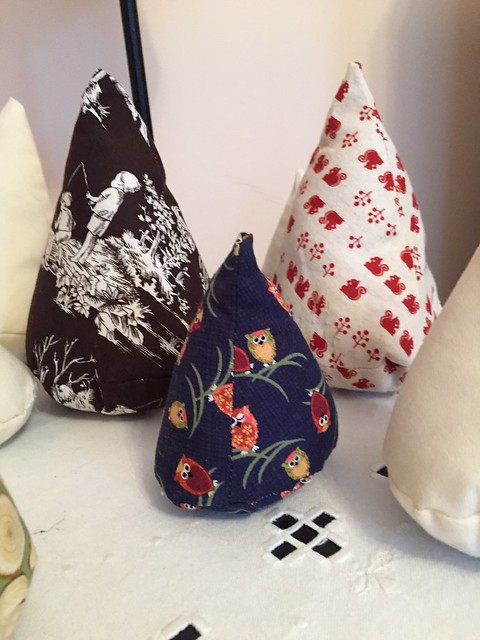 They are awfully goofy, and they never did stand up right. 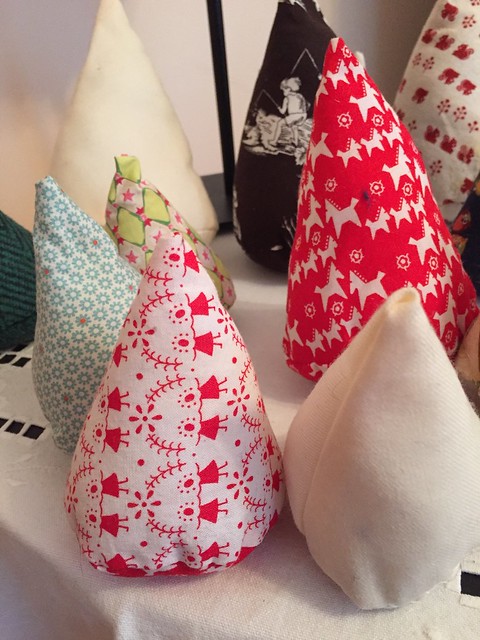 It is definitely getting to be the season. We’re flying to Montreal for Thanksgiving to see M and A. I am so excited. It’s going to be cold! I am going to have to restrain myself and only bring one pair of mittens and a reasonable number of pairs of boots. Do you think I need long underwear? How many sweaters? Thank god I have a lot of woolly socks. (I am actually equipped to live in the Arctic. In my sadness at living in a mild climate, I console myself by acquiring things — mittens, socks, sweaters, hats — for my eventual move North. I could go right now. I would like to take my house with me, though.)

We’re driving to my brother’s house in Vermont for the day itself. We’ll have to leave after M’s class on Thursday pm, and come back before her class on Friday am. Those Canadians — seems they do celebrate Thanksgiving, but in October. Luckily, Vermont is part of the U.S., and my sister-in-law is a really good cook.

Inexplicably, I think M and A are going to leave Montreal and move to China sometime next year. I expressed my dismay over this — China is far, and it isn’t Montreal, and I think I really like Montreal — and M said I could go ahead and visit it even if she wasn’t there. And I think I just might — that Justin Trudeau is awfully cute (I know he’ll be mostly in Ottowa) and I have always wanted to learn French. 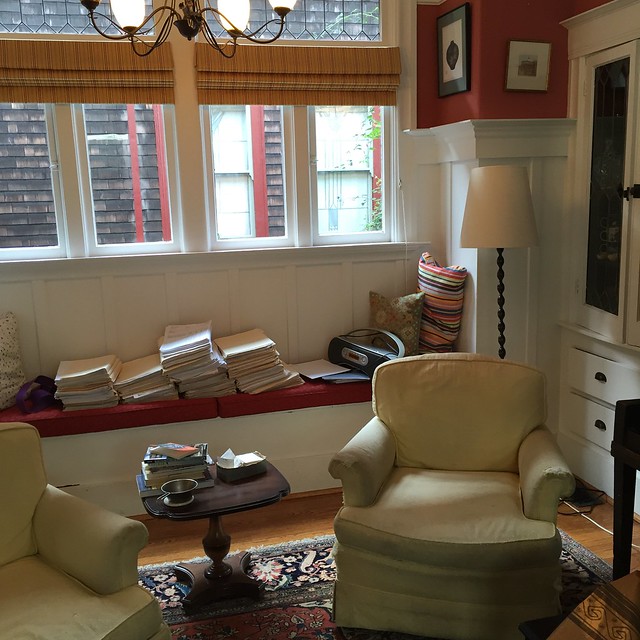 I love this time of year. It’s time to examine all the piles of crap that have drifted in throughout the summer, throw most of them away, and make the house cosy. If we’re lucky, it will rain a lot, and we will need to spend hours and hours inside. Or, we will go outside anyway, but then need to come back in and cozify.

In the interest of cozification, we’re recovering those yellow chairs! They have an almost mythic status in family lore — they date from the period where we really had nothing else very comfortable to sit on. They came with the condo my mother bought in the early nineties. The woman who had owned it before sold it completely furnished, and suddenly there were two rather comfortable little armchairs up for grabs, so we took them. You can tell by looking at them how well-loved they were. And are.

Anyway, I know this is heresy, but I never would have picked that yellow. I’ve grown pretty fond of it, though. You will have to wait to see what color they will become.

I have already moved that metal cup down to the basement, with the rest of the camping gear — 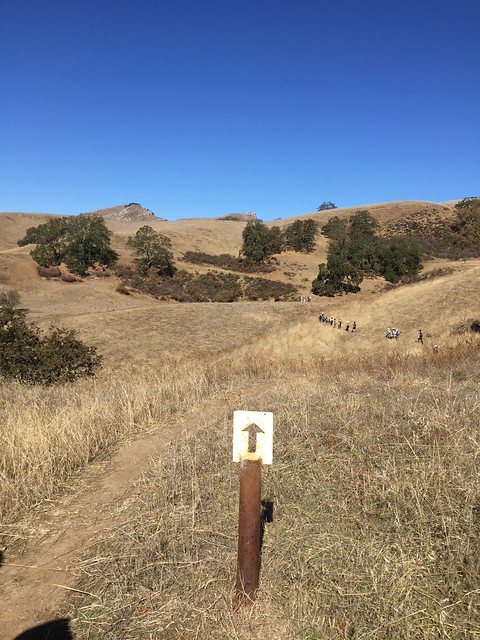 So, I did go for a hike. That peak in the distance is where we’re headed. 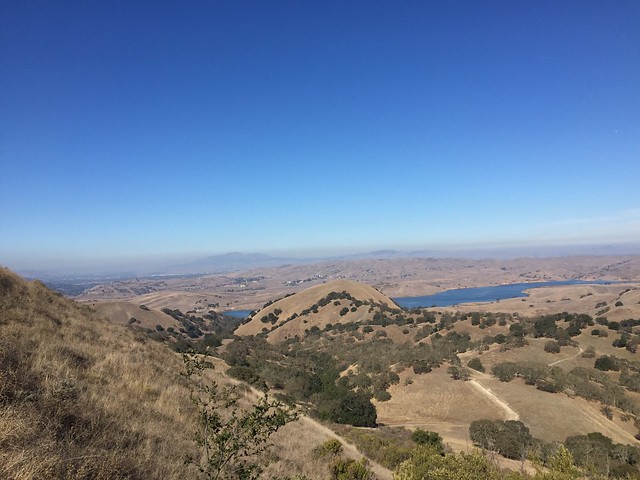 It was tough, but I’m glad I did it. I love hiking with my friends, but it’s also great to find that there are groups of people — people I don’t know but who announce it here and there — who go out every weekend and don’t mind going a fair distance. 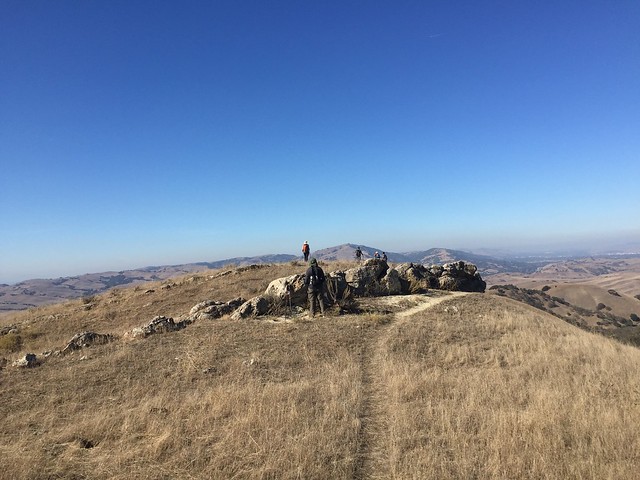 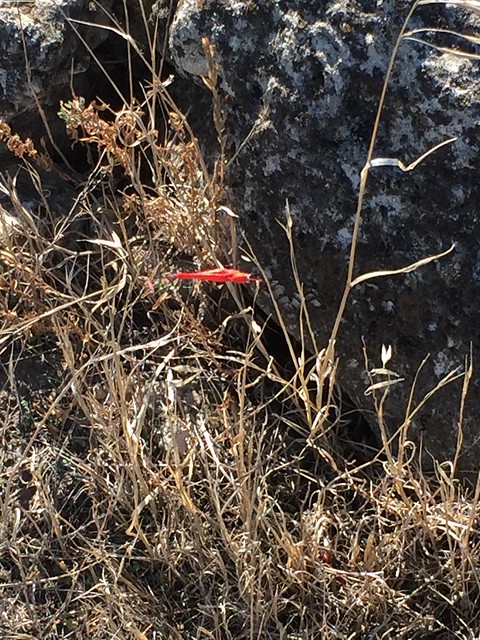 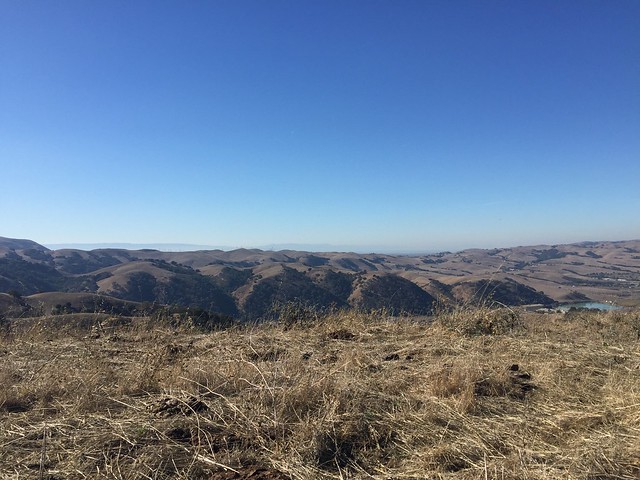 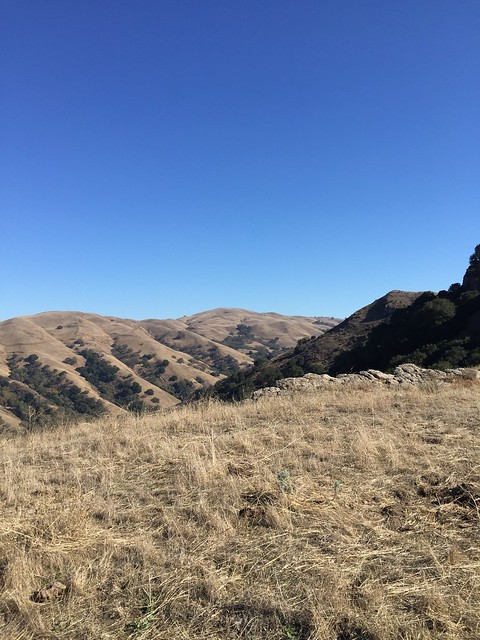 Sunday I got the whole front yard (which is very small) dug up and composted, just in time for the rain today. Soon I’ll plant some new things to grow slowly over the winter and burst into enormous flowers in the spring.

Very satisfying to return to my usual pastimes here at home. And word came from both daughters and they seem happy and busy, and that is the very best thing of all. 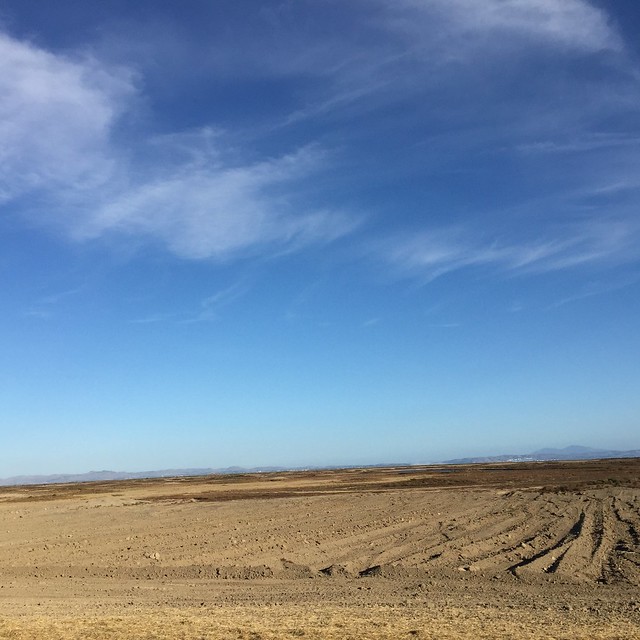 I am feeling so antsy. Part of it is that I was gone so much this summer, I am sure. It’s left me feeling at loose ends. There are a million things I do and don’t want to do at home. Cook things, reupholster things, dig up things, sort through things. But when the weekend comes, I do not really want to do those things after all. I want to go outside in the beautiful weather and have adventures.

You know what, I remember being a kid and reading books like My Side of the Mountain. I would spent summers at my grandmother’s lake cottage reading about how to cook fish in paper bags over coals. It’s kind of hard to go from reading about adventures to having them, but I think that’s what I’d like to do. (I do not, however, want to eat a fish cooked in a paper bag over coals. Or maybe I would, but not just yet.)

I know, I did have adventures this summer. But it wasn’t enough, so I’m going for a hike with the Sierra Club this Saturday — just a local one. Then on Sunday, if it doesn’t rain, (if it doesn’t rain! who thought it would ever rain again!) I will dig up the garden and hang out the laundry and — whether it rains or not — cook things. 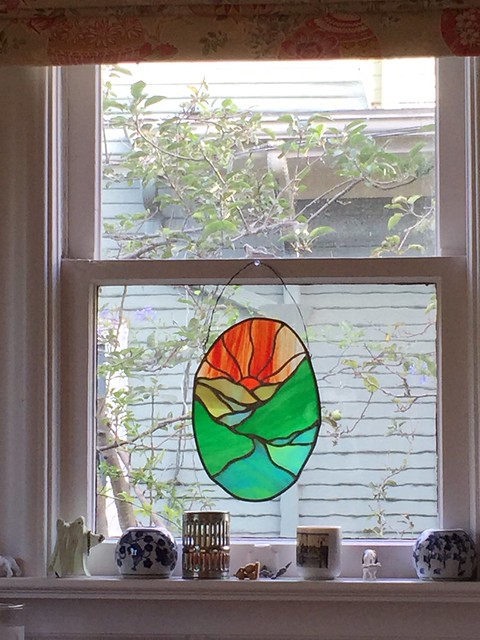 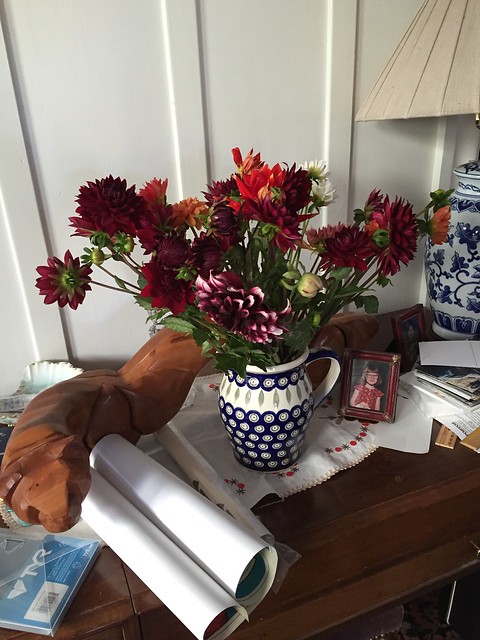 This is kind of it, then. Aren’t these lovely flowers? What is all that mess all over the table?

I’m trying to get stuff in order, but there’s just been too much going on. Or Something. It’s giving me fits.

I think I’m going to go for a hike on Saturday, and do all the house-related necessary activities on Sunday. Or anyway, that’s my story and I’m sticking to it. I think I’ve got to get outside for a bit and stretch my legs.

Here. Have a pumpkin and a grapefruit! 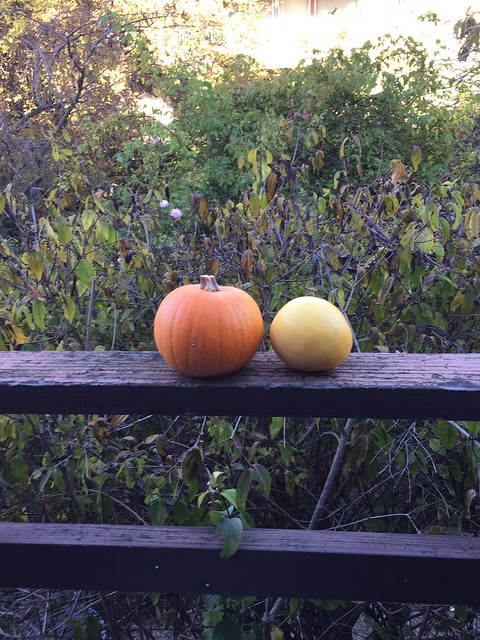 In other news, I think my hand is finally getting better. It’s moving more and not as stiff.

Halloween has come and gone. Too hard to wrangle a picture here on an iPad.

I really have to go dig up the garden, and I know that I will feel better once I do.

Feel like all kinds of adventures are out there waiting, though. It’s fall. It doesn’t matter here, but apparently it’s going to snow in the mountains soon.

Feeling somewhat melancholy, although there really is no good reason.