M is going to Italy!

I have been looking through her equipment list — lots of paints, brushes, and a pochade box. 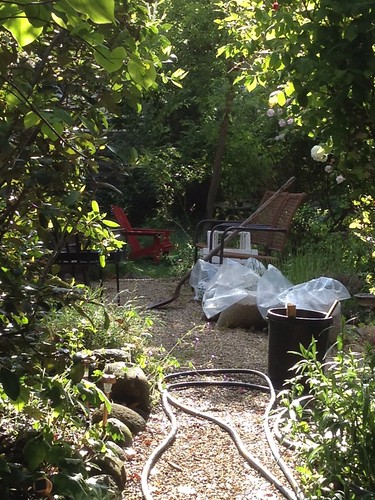 At a conference last week, and about to be off on a family endurance vacation soon. You know what I mean —

Something for everyone, right? 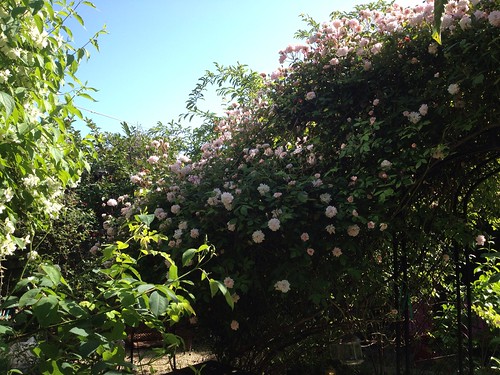 Meanwhile, my roses are just about to explode . . . 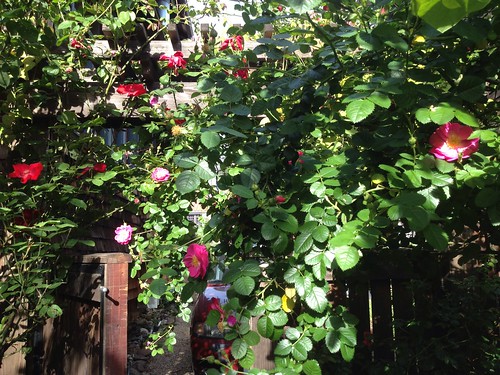 They are pretty heavenly.

There is an incredible amount of information on the internet, if you poke around long enough.

For various reasons — it’s about Russia; it’s about youths finding their way in the world (or not); it’s about crazy families — I’ve been interested in figuring it out.

My theory is that the family fell apart. The mother became more religious. She convinced the older son to become more religious, and because he was already floundering and unstable, he was fallow ground for extreme views. The sisters were married off at young ages, so they were no longer at home, and their marriages fell apart. (One of the sisters has an older son, somewhere.) The parents split up and moved back to Dagestan, and when the youngest had a difficult transition to college there was no one around to help him so he, too, was unable to resist the older brothers extremism. Apparently the parents were planning to marry off the youngest in Dagestan next month, and I’m sure he felt trapped by that, too. That’s slightly odd, because the parents met at university, and so clearly, theirs was not an arranged marriage. But there was a cultural disconnect between the parents and the kids. The problem for the oldest was that he didn’t fit in here or there. The youngest could have fit in here, but had only bad guidance, due to both the broken family/absent parents and the fact that his parents did not really understand or embrace life in America, when he was at a critical point.

There’s something, too, I suspect, about Chechen ideas of masculinity, and how that may have been working in Tamerlan’s psyche, too, maybe especially because he really wasn’t Chechen or American. Here’s an interesting article. It strikes me that the title for a recent book on the Caucasus, Let Our Fame be Great, may not be unrelated, either.

It is tragic — the whole thing is tragic, and I apologize for expending more thought about the perpetrators than their victims — but the story of the bombers touches on so many really interesting conflicts.

Then there’s the whole Katie story (the wife of bomber 1). I think she was just hypnotized by him.

But don’t you wonder who was taking care of the baby when bomber 1 went out? Where is the daughter’s missing child?

Speaking of broken families and kids abandoned at critical junctures and what becomes of them, I’ve also been reading this, and this, which are fascinating. And I guess it kind of reminds me of my grandmother’s story as well. It’s a dicey business, being human.

Anyway, the roses are blooming like wild. I’ve got to get out to the garden. I’m a little sad that I’m about to go away for two weeks. Recent evidence indicates that I lose not only the two weeks, but the next weekend for an extended period of moping and vacuuming. I think it’s inevitable.

But we get to see N, who has found a new apartment and wants us to come see it. That will be fun, as will my drive from Ohio to New York with M. The reason for the trip is my brother’s (second) wedding, and to see K’s aunt and uncle, as a sort of makeshift memorial for his mother. I’m complaining, but I really am looking forward to all of it. I’m just thinking that someday we need to take a non-extended-family-related vacation. Someday before we have to do it in wheelchairs.

For people (myself) reading this in 5 years, or 6 months, this is the Monday after the week of the Boston bombing.

The whole thing is sad and hard to get over.

It just reminds me of how precarious life is, and especially that time between childhood and adulthood.

That’s all I’ve got.

I doubt I was very clear below — I went to Arizona. My grandmother, who is very old, has a condo there. So does my aunt, who usually lives up in the mountains, and so does my mother, who lives in Massachusetts but goes west for part of the winter. A brother and a cousin and their families fill out the number of relatives in the area.

The animals above belong to my cousin’s son. They’re on a voyage. (The thing that looks like a chair is really a boat.)( I sent this picture to my daughter, M, who answered, “Where are you? Heaven?”

M has a fine collection of plastic animals herself, but probably not this many.)

In any case, it’s a complicated thing my family has got going on there, but who am I to judge?

My grandmother was quite clear that what she wanted in her book was pretty much the story of her, and her father’s wealthy brother’s family, and her three siblings (just a little), newspaper clippings of her college outfits and then baby pictures of her children and nothing more. Pictures’ of her children’s families (there wasn’t that much, actually) should go in another book all together. I found what must have been her grandmother’s scrapbook, and she pretty much wanted me to tear it apart and throw it all out except for a few pictures of her. (I did not. I brought it home with me.) I was also instructed to throw away the picture of her and my grandfather when she was about 19 — they are standing in their bathing suits at her aunt’s lake cottage in Minnesota. She looks radiantly happy. (I did not. I brought it home.)

My grandmother is pretty much a tartar. She’s an amazing woman, but anyone who has ever met her, or her children, would agree. Something happened, or nothing happened. She has the personality she has. She never got over it.

But now that I think about that, she was 28 when her grandmother, the last person who really cared about her as a child, died. She had an aunt — her mother’s sister — in Fargo, and a sister who came by often. But her beloved older brother had run away while her mother was dying, and I think my grandmother may have felt that the aunt liked grandma’s sister and younger brother better. She lost her family and probably felt alone and oppressed by my grandfather’s large and tight knit family, and didn’t know how to figure it out. I guess that actually does make sense.

Anyway — It really was fascinating. My grandmother’s family mostly came over from Scotland to Canada in the 1820s (although some a bit earlier) and at one point some distant cousin did a lot of research on their various exploits. They lumbered, and worked on railroads in the U.S. and Canada and moved around a lot, but often visited one another and traveled often back to Canada to visit the family who had stayed there. Who knew people from those times moved around so much?

So very tempting to play hooky and go for a hike this morning.

Instead, I have to do a bit of grocery shopping, pack (including finding my summer clothes, which I suppose I’m going to need anyway), stop at the scrapbooking store to see if they have archival supplies. And go to work.

My brain is a waring blender this morning.

(That is a lovely meadow, above. Not sure you can tell from the photo. In fact, it may be a bit too perfect. No, it’s just right.)

That is a clematis I planted quite some time ago. Last year I gave it a trellis [not pictured here] and this year it’s looking very happy indeed.

I’m going away this weekend. As is entirely predictable, the garden is about to go crazy and I have lots to do.

Oh well. It probably would not feel so pressing if I were planning to be here.

Someone in the family is getting married.

Did I mention this all ready? I think I may have.

The drama! The excitement!

Ah, I did. Let’s just say that the evite continues to provide entertainment.

The good part is that, for me, the trip to the wedding, which will of course be lovely and a lot of fun, is connected with a) seeing the Non-Necromancer and b) a drive with the youngest daughter through the wilds of Ohio and upstate New York. Honestly, that’s my favorite sort of trip.

I think I will start looking right now for exciting things to look at.

Hmm, we won’t be all that far from the St Lawrence River — not far at all from my grandmother’s ancestral home, in fact. Too bad there’s not really time to go visit. Hmm. Something to think about —

I’ve really been enjoying the unexpected rains. It rained again last night, and this morning everything is lush and green.

It was a good weekend. I talked to my mother on Saturday. I’ll go visit her (she’s in Arizona for the winter, with my grandmother) next weekend. The plan is to redo my grandmother’s genealogical scrapbook. The current three-ring binder is apparently falling apart. My grandmother is quite attached to this material, although from what I remember it’s kind of a mess. She is the descendant of Scottish people who moved to Canada after the (American) War of Independence. They then came through Michigan cutting down trees and ended up in Idaho and Vancouver.

We also discussed plans for my younger brother’s upcoming wedding. The entire family will be there, except M, who has finals. I helped my mother send out the evite for the rehearsal dinner. Go ahead and imagine what that was like — I’ll give you a hint. It was complicated, and there may have been some miscommunication along the way. I think it turned out all right, though. In an act of subversion, K and I made reservations to stay at a B and B with my brother and his boyfriend. Suddenly, the whole thing feels more like a vacation.

I went to the native plant nursery.

I ran into our neighbors, whom we haven’t seen since January. It really does feel like everyone has been holed up since the winter and is only now coming out of hibernation.

I went for a 6 mile hike with a hiking group, which was really fun. We met at 9:30, hiked until 12:30, went pretty fast on a challenging hike through fields of buttercups. The people were nice. Pretty amazing. I’ll do it again — it’s actually nice to go on a hike that someone else has planned out.

Friends came over for dinner!

Winter is over, and spring is here, and it’s time to be doing stuff and seeing people again. 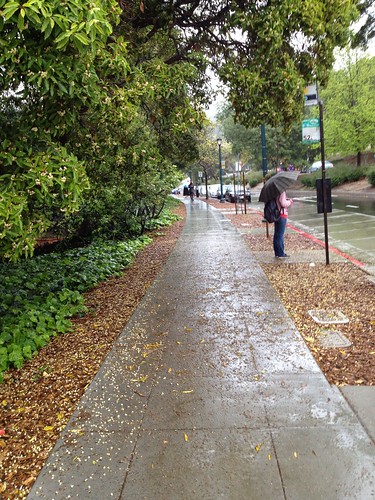 I realize it’s April, and probably should be raining in many parts of the world, but around here, it’s usually done by now.

The bus was full this morning, and the windows steamed up. The driver nearly jolted us from our seats.
It was great to emerge into fresh clear air.